For a few months now, Google has been testing different ad layouts on it’s search results pages – principally moving the paid advertising from the right hand sidebar, into the main column of content.

Well, it now seems that they’ve finished testing and are rolling out the change more widely. This is likely to have a pretty significant impact on search behaviour.

For a while now, search results have always looked a bit like this: 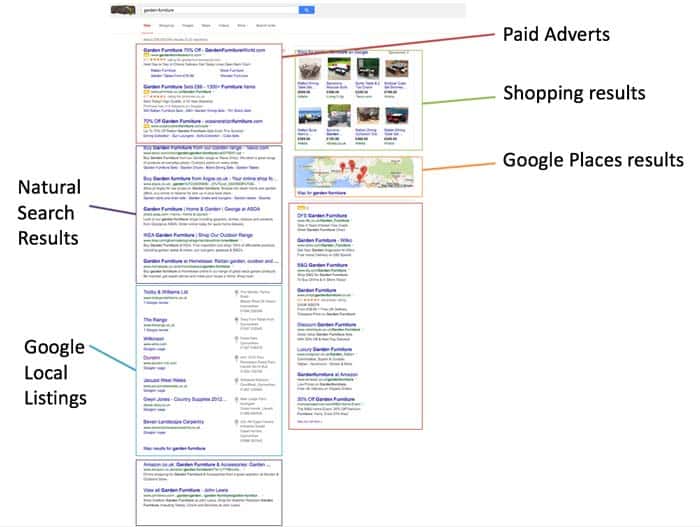 Two columns of results, the main column including up to three adverts at the top and then natural search results, with more ads, shopping results and other widgets in a right hand sidebar.

Google’s been testing alternative layouts for a while, and the version that’s been spotted in the wild most is a single column: 4 adverts followed by natural search results, Google Local results and, at the bottom, further adverts. Like this… 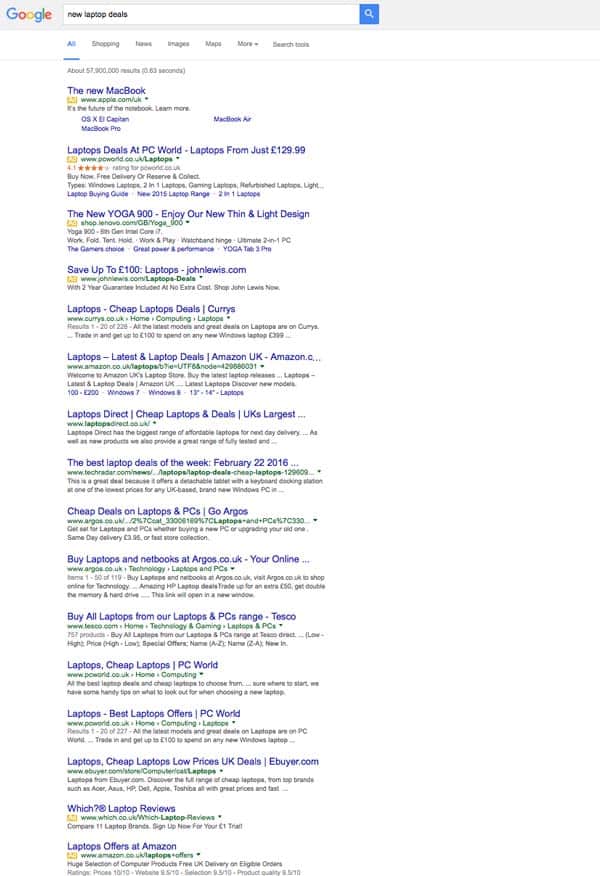 Well, it seems that as of this week, Google’s rolling out this change more widely.  Moz have been tracking this and have seen this layout now appearing around 20% of the time. 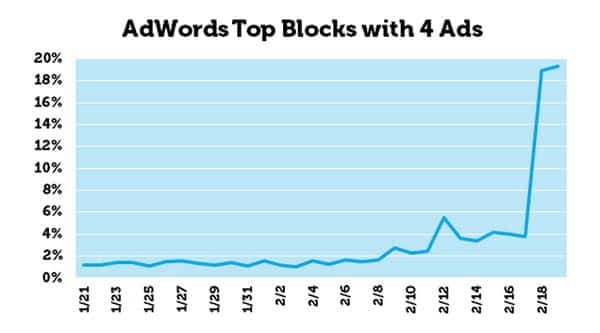 Why are Google changing?

Google plays their cards pretty close to their chests about what’s driving any particular test, but there are likely to be three factors:

Google need to ensure their profits maintain a positive trajectory and, despite having fingers in lots of pies, advertising still makes up over 90% of their revenue.

Google need to ensure that people see, and click on, the ads in their search results and trying new format layouts allows them to find ways to increase this.

Mobile is becoming the primary way people view the web. It could be that, as the results sidebar doesn’t fit on a mobile screen format, Google are trying to al

With Knowledge Graphs, Paid Shopping Blocks, and Google Local panels appearing the right hand column over the last few years, adverts are often pushed below the fold. There’s likely to be pressure from advertisers to ensure that ads are more consistently viewed on screen.

Whatever the driver it’s clear that things are still a little volatile, but it’s reasonable to predict that this screen layout become the status quo.

What does it mean to me?

If you’re a Google Adwords user, it’s simple. The first four ad spots become far more valuable. If your ad appears below position 4, the chances are the number of clicks you’re going to get will drop significantly – the ads are far less likely to get seen. With that in mind, you’ll need to adjust your bid strategies accordingly.

Beyond Google Adwords, the impacts are more wide ranging. Obviously, if an extra advert is being squeezed on to the top of the page, the natural search results get pushed down a bit.

That doesn’t sound like the end of the world, but a large number of people aren’t aware that any of the search results are advertising – the last research I saw put the figure at 36%. So the effect of the extra ad is likely to be that being top of natural search for a given term is likely to deliver less reward than it has.

There’s a problem though…what happens when Google decides to show other content as well as its Ads in the search results?

Well, here’s the results page for ‘cardiff hotel’. As you can see Google Local results are appearing immediately below the adverts, which means all natural search results are pushed well down the page, below the fold. In this circumstance you can expect the Adverts to get a far higher proportion of clicks from the page than they traditionally would. 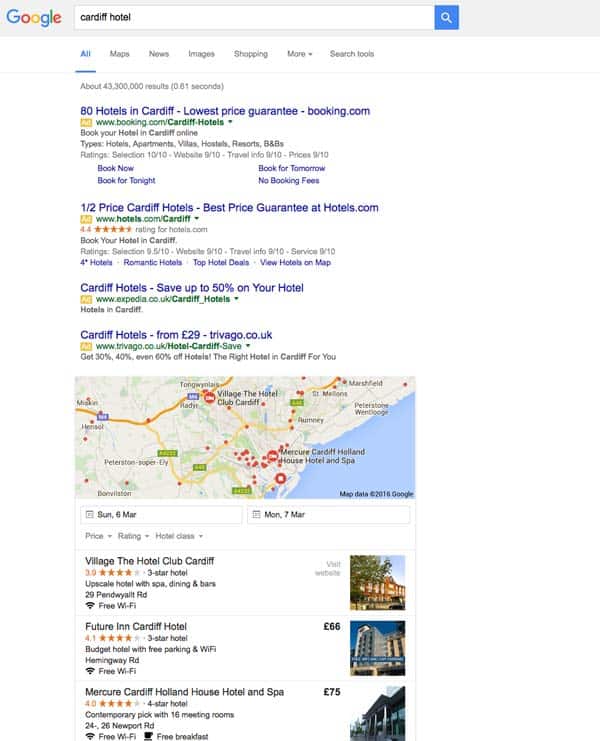 So, what should you do? Well, the first thing should be to keep an eye out. Use your analytics to track traffic from Natural Search and see if performance levels change.

If you want to try and recover any lost traffic, well, the obvious answer is start using Google Adwords to appear at the top of the page. By testing ads on your key terms to see if they’ll deliver you profitable traffic to your website, you may find that you can actually get more traffic than you had before!

We’d love to know your experiences of these changes. Have you seen a dip in traffic levels in the last few days? Let us know in the comments.

Google have now confirmed that this new layout “is designed for highly commercial queries where the layout is able to provide more relevant results for people searching and better performance for advertisers.”

Effectively this means on searches where customers express an intention to buy. Despite their comment, we are seeing it pretty broadly though!

Looking for help with your website? Get in touch with us here.

Or you can share your thoughts below - we'd love to hear what you think.